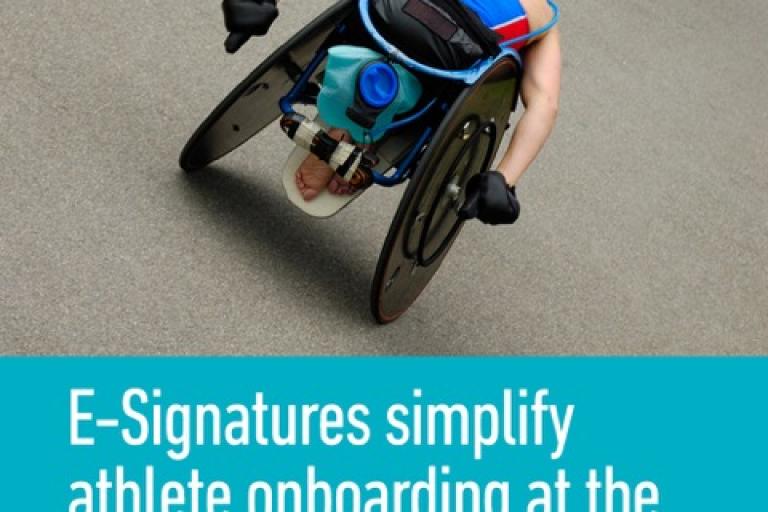 We recently worked with the Canadian Olympic Committee to streamline a signing process for the Pan Am and Parapan Am Games. This is actually a great story for anyone who loves sports. Anytime you watch a sporting event, there are always a lot of documents behind the scenes that have to get signed.

For the 2015 Pan Am and Parapan Am Games (the Parapan Am Games end Saturday, August 15), when an athlete gets the news that they have been selected to Team Canada, there are onboarding documents to sign. That process has always been done with paper. But imagine you’re an athlete. The focus on training is intense. The last thing you need is the stress of making sure documents don’t get lost in the mail.

The Canadian Olympic Committee came to us because they wanted to make the onboarding process easier for athletes. They wanted to take paper out of the equation. So, in the weeks leading up to this year’s Games, athletes were e-signing from laptops, PCs, tablets and smartphones. No trips to the post office. No photocopies. Instead, documents were e-signed in just a few clicks.

Making the process easy for staff

The Canadian Olympic Committee also needed e-signature technology that would be easy for the employee who was sending out these forms for signature. There are 2,000 copies of forms that need to get signed. To make that part of the job easy as well, we showed staff how to set up templates. Each sport has a slightly differently onboarding form and each form comes in different languages, so by setting these up as templates in e-SignLive, staff only had to add the signature, data and name fields to each master template once – not 2,000 times.

Then, we showed staff how to set up the templates on Fast Track. It’s a major time saver if you need to send out the same document to many different individuals. You have one mailing list, and the link to the document is sent out to everyone at once.

Within two training sessions, staff was able to use these features and send out all the documents for signature.

Making integration easy for IT

So e-SignLive made the job easier for athletes and easier for staff. But there was still one group who e-signatures had to be easy for, and that’s IT. In IT’s view, the thing that made e-signatures easy to implement was the fact they were able to use our API, sample code and documentation to quickly integrate with their onboarding portal. They also wanted to do some branding, to provide athletes with a seamless experience. The branding was a little trickier because they were setting it up in two languages, but within 3 – 4 days, they had their logo, colors and custom text in the GUI and were ready to go.

In addition, the Canadian Olympic Committee benefits with an easier and more eco-friendly way to track, manage and store multi-paged consent and contract documents – all in full compliance with Canadian data residency requirements. Being able to onboard Canadian athletes, coaches and Team support while keeping their data in Canada through an instance of e-SignLive on IBM Cloud’s SoftLayer infrastructure, was important for the Canadian Olympic Committee.

Across the board, our customers want e-signatures to be easy for everyone involved – whether that’s the signer, the sender or the IT department. Trading pen and paper for e-signatures is just an easier, faster and more efficient way to get to the finish line.