"We are announcing a substantial restructuring which will permit the Company to refocus its resources on its core business: strong authentication and digital signature, and secure Internet, corporate network and remote access with our strong line of server products. The objective of this restructuring is to accelerate our path to profitability and positive cash flow by lowering our quarterly revenue breakeven point from approximately $11 million to about $7 million," stated Mario Houthooft, VASCO's President and Chief Executive Officer.

"Our third quarter results are below previous estimates," he added. Although operating expenses were also lower than previous estimates, the economic downturn has substantially affected our ability to sell large projects. Since the outlook for Q4 is continued weakness in the large enterprise software market, especially in the United States, we are undertaking aggressive action in order to protect shareholders' value."

Dennis D. Wilson, Executive Vice President and Chief Financial Officer stated, "We are announcing a staff reduction of 60 persons of our 150 worldwide workforce, mainly in the US and at smaller offices in France, the UK and the Netherlands, whose strategic activities will be assumed by the larger offices. Consolidation of our R&D centers and reallocating resources to focus on our core business will permit significant efficiencies to be achieved over the next twelve months. The restructuring plan is expected to be completed in six months."

He continued, "The majority of the cost reductions, however will be achieved in the next 60 days. Significant reductions will also be made in travel and communication costs, and in finance and administration. Our target is to reduce total operating costs by approximately 40% from Q3 levels. This should permit the company to show positive operating cash flow at quarterly revenues of approximately $7 million per quarter. We expect a restructuring charge in the fourth quarter of between $500,000 and $1 million from this activity. In conjunction with this restructuring, we are also undertaking a complete review of our intangible asset values, which could provide an additional non-cash charge in the fourth quarter which cannot be estimated at this time."

-- Funk Software added native support for VASCO's Digipass family of
two-factor authenticators to its Steel-Belted Radius family of
RADIUS/AAA servers for remote and wireless LAN user authentication,
authorization and accounting, for maximum flexibility for users who
wish to use Digipass authentication to secure their networks.

-- Signed an agreement with Artesia Bank, Brussels, Belgium, to revise
the terms of its outstanding $3.4 million convertible loan with
Artesia. Under its revised terms, the loan will now be convertible
into shares of VASCO Common Stock at the fixed conversion rate of
$7.50 per share rather than a floating rate based on the market price
of the VASCO Common Stock. The maturity date of the convertible loan
is September 30, 2003, with an interest rate of 6%.

-- Introduced Digipass security software making strong authentication
and digital signature security available for Microsoft's Pocket PC
platform. Millions of users of Pocket PC PDA's and smart phones can
benefit from secure access to corporate networks and e-business and
e-commerce applications, with all the mobility and advantages of a
Pocket PC device. According to IDC, over four million Pocket PC
mobile devices have shipped to date, and more than six million
devices will be sold into the enterprise in 2004.

-- Opened a sales office in Sydney, Australia, the financial and
commercial market center of the country, to leverage growth of
Australian e-commerce initiatives. The Australian AAA security
market is expected to achieve a 54% CAGR by 2005. The Sydney office
will further support and leverage the company's already considerable
installed base in the region, which includes remote banking and
corporate network customers such as Austereo, Richard Ellis, Mortgage
Choice, Granny May's, Blake Dawson Waldron, the Queensland Department
of Transport, and BytePower.

"We ended the third quarter with nearly $8 million of cash," noted Dennis D. Wilson. "Our forecast is to end the year with over $3 million of cash and have positive EBITDA in the first quarter of 2002. We believe we have sufficient cash to reach positive cash flow by that time."
VASCO Data Security International, Inc. reported the following unaudited results (see attached graphic).

Conference Call and Live Webcast
VASCO will hold a conference call to discuss its Q3 earnings on Wednesday, October 24, 2001 at 10:00 a.m. Eastern time. A live webcast of this conference call will be available from the investors section of VASCO's website at www.vasco.com as well as at www.streetevents.com; participants should register for the webcast approximately 15 minutes prior to the event to download and install any necessary software. The webcast will also be archived on the VASCO website. The Conference Call will be recorded, and an Instant Replay will be available 24 hours a day until midnight on Friday, October 26, 2001, by calling:

About VASCO
VASCO secures the enterprise from the mainframe to the Internet with infrastructure solutions that enable secure e-business and e-commerce, protect sensitive information, and safeguard the identity of users. The Company's family of Digipass(R) and VACMAN(R) products offers end-to-end security through strong authentication and digital signature, enterprise Single Sign-On, and LAN security, while sharply reducing the time and effort required to deploy and manage security. VASCO's customers include hundreds of financial institutions, blue-chip corporations, and government agencies in more than 50 countries. More information is available at www.vasco.com .

Reference is made to the Company's public filings with the US Securities and Exchange Commission for further information regarding the Company and its operations.

all of VASCO
URL: http://www.vasco.com 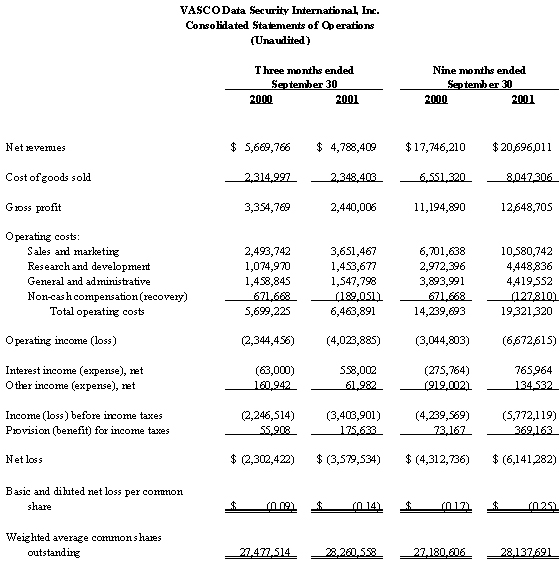