“VASCO® returned to growth in the quarter with positive contributions across hardware, software, and services,” stated Scott Clements, VASCO CEO. “Record revenue in non-hardware offerings contributed to higher operating profit. We are executing on our strategy to sustain our hardware business while driving growth in software and services that secure the operations of our banking and enterprise customers.”

1 An explanation of the use of non-GAAP measures is included below under the heading “Non-GAAP Financial Measures.” A reconciliation of GAAP to non-GAAP financial measures has also been provided in tables below.

Operational and Other Highlights

VASCO is increasing its guidance for the full-year 2017 as follows:

In conjunction with this announcement, VASCO Data Security International, Inc. will host a conference call today, October 26, 2017, at 4:30 p.m. EDT/22:30 CEST. During the conference call, Mr. Scott Clements, CEO and President, and Mr. Mark Hoyt, CFO, will discuss VASCO’s results for the third quarter and first nine months of 2017.

VASCO is a global leader in delivering trust and business productivity solutions to the digital market. VASCO develops next generation technologies that enable more than 10,000 customers in 100 countries in financial, enterprise, government, healthcare and other segments to achieve their digital agenda, deliver an enhanced customer experience and meet regulatory requirements. More than half of the top 100 global banks rely on VASCO solutions to protect their online, mobile, and ATM channels. VASCO’s solutions combine to form a powerful trust platform that empowers businesses by incorporating identity, fraud prevention, electronic and transaction signing, mobile application protection and risk analysis. Learn more about VASCO at VASCO.com and on Twitter and LinkedIn.

This press release contains forward-looking statements within the meaning of Section 21E of the Securities Exchange Act of 1934 and Section 27A of the Securities Act of 1933, including, without limitation the guidance for full year 2017. These forward-looking statements (1) are identified by use of terms and phrases such as “expect”, “believe”, “will”, “anticipate”, “emerging”, “intend”, “plan”, “could”, “may”, “estimate”, “should”, “objective”, “goal”, “possible”, “potential”, “project” and similar words and expressions, but such words and phrases are not the exclusive means of identifying them, and (2) are subject to risks and uncertainties and represent our present expectations or beliefs concerning future events. VASCO cautions that the forward-looking statements are qualified by important factors that could cause actual results to differ materially from those in the forward-looking statements. These risks, uncertainties and other factors have been described in our Annual Report on Form 10 K for the year ended December 31, 2016 and include, but are not limited to, (a) risks of general market conditions, including currency fluctuations and the uncertainties resulting from turmoil in world economic and financial markets, (b) risks inherent to the computer and network security industry, including rapidly changing technology, evolving industry standards, increasingly sophisticated hacking attempts, increasing numbers of patent infringement claims, changes in customer requirements, price competitive bidding, and changing government regulations, and (c) risks specific to VASCO, including demand for our products and services, competition from more established firms and others, pressures on price levels and our historical dependence on relatively few products, certain suppliers and certain key customers. These risks, uncertainties and other factors include VASCO’s ability to integrate eSignLive into the global business of VASCO successfully and the amount of time and expense spent and incurred in connection with the integration; the risk that the revenue synergies, cost savings and other economic benefits that VASCO anticipates as a result of this acquisition are not fully realized or take longer to realize than expected. Thus, the results that we actually achieve may differ materially from any anticipated results included in, or implied by these statements. Except for our ongoing obligations to disclose material information as required by the U.S. federal securities laws, we do not have any obligations or intention to release publicly any revisions to any forward-looking statements to reflect events or circumstances in the future or to reflect the occurrence of unanticipated events. 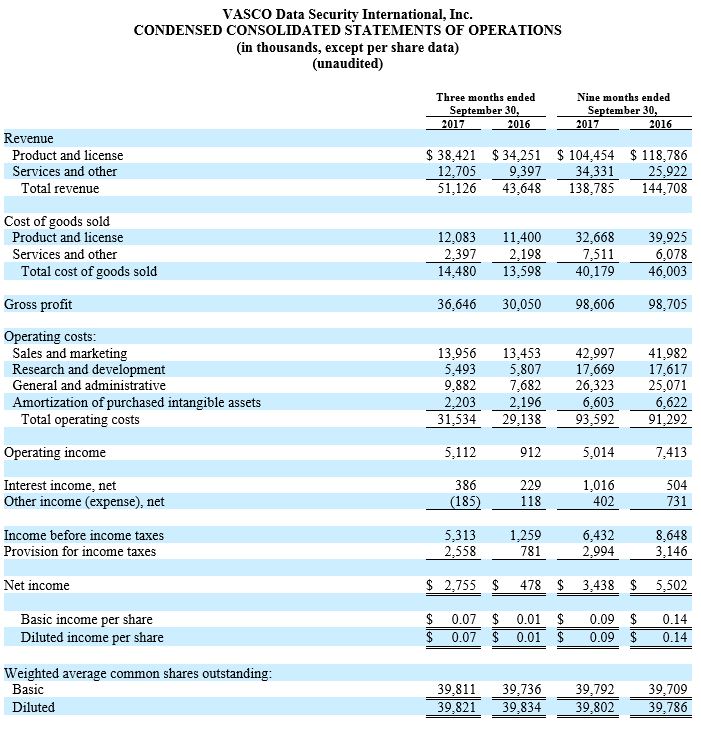 The Company reports its financial results in accordance with GAAP, but Company management also evaluates its performance using certain non-GAAP operating metrics, namely EBITDA, non-GAAP Net Income and non-GAAP Diluted EPS. The Company’s management believes that these measures provide useful supplemental information regarding the performance of our business and facilitates comparisons to our historical operating results. The Company also believes these non-GAAP operating metrics provide additional tools for investors to use to compare its business with other companies in its industry. These non-GAAP measures are not measures of performance under GAAP and should not be considered in isolation, as alternatives or substitutes for the most directly comparable financial measures calculated in accordance with GAAP. While we believe that these non-GAAP measures are useful within the context described below, they are in fact incomplete and are not a measure that should be used to evaluate our full performance or our prospects. Such an evaluation needs to consider all of the complexities associated with our business including, but not limited to, how past actions are affecting current results and how they may affect future results, how we have chosen to finance the business, and how taxes affect the final amounts that are or will be available to shareholders as a return on their investment. Reconciliations of the non-GAAP measures to the most directly comparable GAAP financial measures are found below.

We define EBITDA as net income before interest, taxes, depreciation and amortization. We use EBITDA as a simplified measure of performance for use in communicating our performance to investors and analysts and for comparisons to other companies within our industry. As a performance measure, we believe that EBITDA presents a view of our operating results that is most closely related to serving our customers. By excluding interest, taxes, depreciation and amortization we are able to evaluate performance without considering decisions that, in most cases, are not directly related to meeting our customers’ requirements and were either made in prior periods (e.g., depreciation and amortization), or deal with the structure or financing of the business (e.g., interest) or reflect the application of regulations that are outside of the control of our management team (e.g., taxes). Similarly, we find the comparison of our results to those of our competitors is facilitated when we do not consider the impact of those items on our competitors’ results.

We define non-GAAP Net Income and non-GAAP Diluted EPS, as net income or EPS before the consideration of long-term incentive compensation expenses and the amortization of purchased intangible assets. We use these measures to assess the impact of our performance excluding items that can significantly impact the comparison of our results between periods and the comparison to competitors.

We also exclude amortization of purchased intangible assets as we believe the amount of such expenses in any given period may not be correlated directly to the performance of the business operations and that such expenses can vary significantly between periods as a result of new acquisitions, the full amortization of previously acquired intangible assets or the write down of such assets due to an impairment event. However, purchased intangible assets contribute to current and future revenue and related amortization expense will recur in future periods until expired or written down. Finally, we make a tax adjustment based on the above adjustments resulting in an effective tax rate on a non-GAAP basis, which may differ from the GAAP tax rate. We believe the effective tax rates we use in the adjustment are reasonable estimates of the overall tax rates for the Company under its global operating structure. 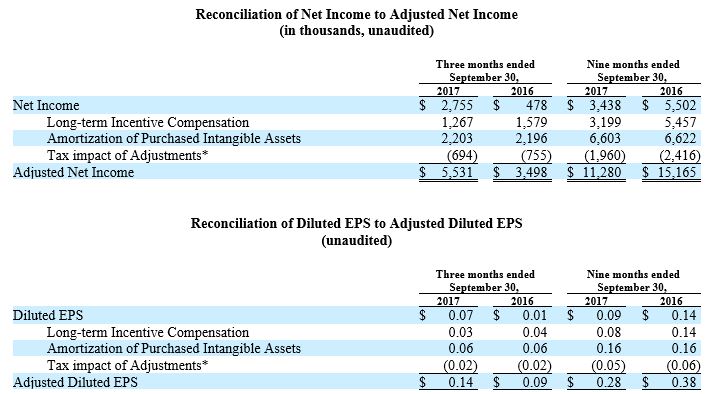