The last twelve months saw significant changes to the security and cybersecurity landscape for organisations that send security codes via SMS text message to their customers for the purpose of user authentication, transaction authentication, or device binding. This article by Andreas Gutmann, Researcher at OneSpan's Cambridge Innovation Centre, explains the steps such organisations can take to improve the security of their services and their user’s online accounts.

Account takeover (ATO) fraud, whereby a fraudster gains unauthorized access to a user's online account, is one of the biggest security threats many organisations face. Frequently used account takeover methods include social engineering, man-in-the-middle attacks, web browser attacks, public WiFi attacks, malware via a webpage or email attachment, and credential stuffing. The most common defence against account takeover fraud is the use of security codes for multi-factor authentication (MFA), transaction authentication, and to achieve device binding for mobile applications. Such security codes are commonly sent via SMS to the consumer’s mobile phone. In the past we discovered unique security risks in how iPhones handle such security codes using autocomplete features and Apple patched some of the reported auto-filling vulnerabilities at the end of 2020.

Security Code AutoFill feature in iOS 14: A partial fix for the vulnerabilities in iOS 12

The Security Code AutoFill feature in iOS is a convenience feature to remove friction in the user experience and, thereby, improve the consumer’s experience when handling security codes delivered via SMS to an iPhone (and MacBook / iMac if consumers share SMS between their devices). The feature automatically extracts security codes from the incoming SMS and provides an interface for consumers to insert those codes into websites or apps with a single tap. 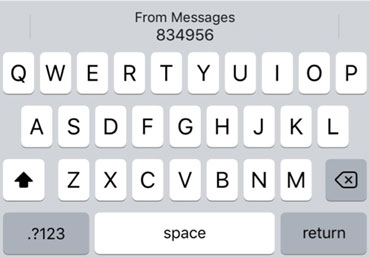 Figure 1: Suggestion by the Security Code AutoFill feature in iOS to fill the security code 834956 into a form field on a website (not shown in this image) by tapping once on the autofill suggestion above the keyboard.

Crucially, consumers are no longer required to open their SMS application and read the SMS when they follow an autofill suggestion. Yet, the autofill suggestion itself does not provide essential contextual information about the received security codes that could be read from the SMS. As a consequence, consumers may be unaware of who sent them a security code and for what purpose. These circumstances can be exploited by malicious actors, as we previously demonstrated here.

Subsequently, support for a security technology called Domain Binding was added to the Security Code AutoFill feature with the release of iOS 14 in late 2020. This enables the sender of a SMS to specify the website on which a security code should be inserted. In the absence of this specification in the SMS, the Security Code AutoFill feature could suggest the insertion of the security code on any website. The required syntax for Domain Binding of security codes in SMS is visualised in the following illustration:

Figure 2: Illustration of the syntax required for domain binding with Security Code AutoFill. The first line is human-readable text intended for consumers who open their SMS application and manually copy the security code. The second line is machine-readable code, whereby @example.com refers to the web domain of https://example.com and #123456 is a security code intended for that domain.

Note that iOS 14 does not support the following devices: iPhone 5S, iPhone 6, and iPhone 6 Plus. These devices will remain vulnerable and will not benefit from Apple’s partial fix through the integration of the domain binding technology.

The following video is a recording of a lecture I gave on this topic at Northumbria University in the UK. In this lecture I go into more details about the security vulnerabilities we found in iOS and the partial fix implemented by Apple.

Multi-factor authentication use cases are the main beneficiaries of the addition of domain binding technology to the Security Code AutoFill feature. Organisations that utilise security codes delivered via SMS for enhanced protection during their customers’ website logins can utilise the Security Code Autofill feature with domain binding to provide a usable and secure customer experience.

Organisations with such use cases should embrace the domain binding technology and adapt the layout of their corresponding SMS. In the (rare) case that organisations use security codes via SMS for MFA on mobile applications, I’ve included an additional security tip below.

Transaction authentication is the least supported use case for the Security Code AutoFill feature and brings the largest risks for organisations that deliver security codes via SMS.

The first issue is that domain binding technology is not appropriate to alleviate typical security risks associated with transaction authentication, for which the main security concern is transaction manipulation rather than phishing. Since the Security Code AutoFill feature decontextualises security codes, users would remain unable to verify that their transactions have not been manipulated when utilising that feature.

A further issue is that if the Security Code AutoFill feature detects an amount of money in a recognised currency it displays this amount next to the autofill suggestion, yet the feature does not recognise many currencies. As a consequence, customers in a country with a recognised currency (e.g. in the UK) could get used to seeing this information whenever they authorise a transaction. Yet, if an adversary were to change the currency to an unrecognised one when manipulating a transaction (e.g. change the currency from Pound Sterling GBP to Swedish Krona SEK), the customer could be deceived into thinking this was a code for Multi-Factor Authorisation.

Organisations could phrase corresponding SMS such that the security codes for transaction authorisation do not get recognised as security codes by iOS. More information on this approach can be found above in the security tips for device binding use cases.

Account Takeover Fraud: How to Protect Your Customers and Business

Andreas is a researcher at OneSpan's Innovation Centre in Cambridge, UK, where he leads OneSpan's research on the next generation of transaction security for online banking. He holds a PhD from University College London and is a recipient of the prestigious Marie Skłodowska-Curie Fellowship of the European Commission.

How Can Banks Mitigate the Risks of Consumers’ Poor Cyber Hygiene Practices?