Signatures Through History - The Declaration of Independence 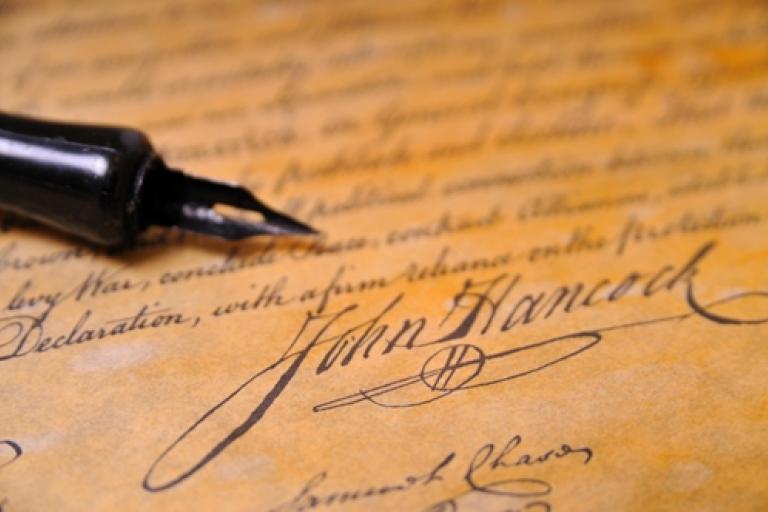 Some of the most famous signatures of history reside on The Declaration of Independence. The document, which heralded that 13 British colonies in America would unite to become independent from their rulers across the Atlantic, features the signatures of prominent statesman, generals and economic leaders of the era. It also has the famous John Hancock, a signature that was so large and bold that it didn't just capture somebody's identity, it caught the spirit of the times.

July 4th is a time of celebration because of everything The Declaration of Independence stands for. The document focused on rights that are inherent to humanity and established a framework for contemporary ideals about how governments and nations should function. This document stood as the foundation for freedom-focused revolutions around the world in the following centuries, making July 4th a holiday that means a great deal in the United States, but also to the countless people whose lives have been bettered by the rights established in the document.

But what if the signatures were never collected? What if the effort to get people together in one place was too great? What if the leaders of the day were not willing to put their innovative political and human rights ideas into an era-defining document?

Gathering the signatures that went into The Declaration of Independence was a marvel. Leading businessmen, land owners and politicians from all over the 13 colonies met for extended periods of time in a room in Philadelphia, baking in the summer heat, and dealt with the discomfort of working there to form the document and then boldly sign it to ratify its validity.

Imagine trying to tell a group of your business' workers that will need to meet in a room that doesn't have air conditioning in the middle of July. They'd probably do whatever they could to either get out of the meeting, change the location or find every fan in the area and move into the space. Try telling them they need to travel miles, by horse and carriage, to a central location where they will meet other people so that they can sign a document, in the aforementioned space that doesn't have climate control, and you may have a mutiny on your hands.

This conjecture probably sounds ridiculous by now. Why would you avoid using widely-accessible technologies just to make your employees do more work to get something basic done? You wouldn't. But you might be doing so by not thinking about every opportunity to leverage technology to make life better for your workers.

Celebrating July 4th isn't just about marveling over the tasks performed by the founding fathers. It also isn't only about looking at how much our lives have changed since that day in 1776. Commemorating such a day also means remembering the boldness, creativity and pride that was demonstrated by the signers of The Declaration. These were people who looked at the problems of their age worked to solve them. Let's celebrate the 4th by considering the challenges we face, even if they are business issues and not matters of national importance, and apply the boldness of the founding fathers to solve them.