Across the world, financial institutions are responding to market-driven and regulatory-driven Open Banking initiatives. In this video, Frederik Mennes, Director of Product Security at OneSpan, discusses Open Banking in the UK, US, Europe, Australia, and Asia-Pacific, and the security risks financial institutions need to be aware of when interacting with third-party providers (TPPs). Learn how FIs can address these risks, as well as what the challenges and opportunities Open Banking creates for neobanks.

Watch the interview in full or read the transcript below.

Hannah Wallace: Hello and welcome to Finextra TV. I'm Hannah Wallace. And today we've been invited to OneSpan to talk about security and compliance in open banking world. With me now is the Director of Product Security, Frederik Mennes. Hello, Frederik. Thank you very much for joining us.

A while ago the US Department of the Treasury actually issued a recommendation for a regulatory approach in the United States. But this recommendation was not implemented because the US financial system is highly fragmented, often state-based, and also because of the cultural aversion against red tape that might be the result of this type of open banking regulation. But this doesn't mean that nothing is happening in the United States. Actually, on the contrary, many of the major banks in the United States have started their own open banking initiatives and are working with third-party providers like Facebook, for instance, to make sure that they can obtain, acquire additional customers and also retain their existing customers.

Beside the United States, there are also other countries, especially in Asia-Pacific, where we see a market-driven approach. This is, for instance, the case in Japan, Singapore, India, and South Korea. For instance in Japan, the regulator is not mandating banks to take any initiative, but still Japanese banks have committed to working with at least one third party provider in 2020. And Japanese banks are committed to really doing this this year.

So, market-driven approaches exist in the world. It means that the market participants take the initiative, and it can certainly be very fruitful.

Hannah: And what about the regulatory driven initiatives?

There are other regions and countries that also follow regulatory-driven approach, for instance in Hong Kong, an approach similar to the European approach is taken with the important difference being that financial institutions can actually choose which TPPs they collaborate with, which is very different from Europe.

But I would like to highlight, finally, the open banking approach in Australia. I believe this is the most ambitious and the most innovative approach to open banking that we have seen so far. Australia is actually moving beyond open banking and proposing an Open Data economy, whereby Australian citizens can not only request financial institutions to share their data with third party providers, but also other companies like energy providers, telecommunications companies, etcetera.

Hannah: That's interesting. Would you say Australia is leading the way then with Open Banking?

Frederik: I think so, yes. I think their approach is very interesting, very ambitious. And I believe that over time we will see similar approaches in other parts of the world.

Hannah: I think we should talk about some of the risks open banking involves as well. What would you say are some of the most important security risks that financial institutions need to be aware of?

Frederik: Open banking brings very different security risks to both financial institutions and third-party providers such as fintech companies. It’s very important that these companies deal with the security risks as soon as possible as they start participating in the open banking regime. There are largely three types of security risks that I see.

Secondly, the second risk that I see relates to the authentication of the payment services users, so the users of the applications provided by the TPPs. So it's very important that these users are properly authenticated when they try to access a bank account held by financial institutions. Now, we don't want to see a situation whereby a user of a TPP application can obtain unauthorized access to a bank account that is perhaps under the control of someone else.

Hannah: Would you say that's complicating things then?

Frederik: Yes, it's certainly increasing the risk postures of financial institutions, and they have to be aware of this and deal with it.

Hannah: You've highlighted the risks there, so my next question, naturally, is how can financial institutions can address these open banking security risks?

The second risk that I mentioned was about authentication of the users of the TPP application. There are different approaches to addressing this risk in different open banking regimes. But if we look at the approach in Europe based on the revised Payment Services Directive, financial institutions will have to authenticate the users of TPP applications when such a user wants to access his bank account. And PSD2 pays lot of attention to the way this authentication has to be performed, so it mandates two-factor authentication, it mandates transactional authentication based on dynamic linking, it also requires transaction risk analysis to be performed in order to spot fraudulent access attempts and fraudulent transactions.

And then finally, the third risk was about incidents happening at TPPs, like data breaches that could also impact financial institutions. And, again, PSD2 pays a lot of attention to the security of the infrastructure of TPPs. So these requirements are about creating security policies, they talk about proper network security controls, performing penetration tests to proactively detect vulnerabilities, etcetera.

Hannah: Well, you've certainly described the risks and how to address them really well there. The last thing I would like to talk to you about is neobanks and what open banking means to them?

Hannah: So as well as everything else, that is definitely a space to watch. But Frederik, for now, thank you so much for sharing your insights. It's been a pleasure. 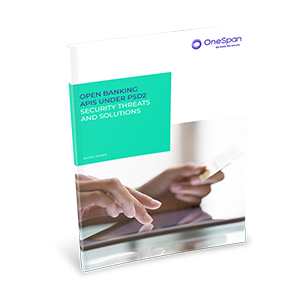 Download this paper to receive an overview of the security threats and solutions for the Open Banking APIs under PSD2.