[Infographic] ESIGN DAY - Symbols, Seals and Signatures - How ESIGN Came to Be 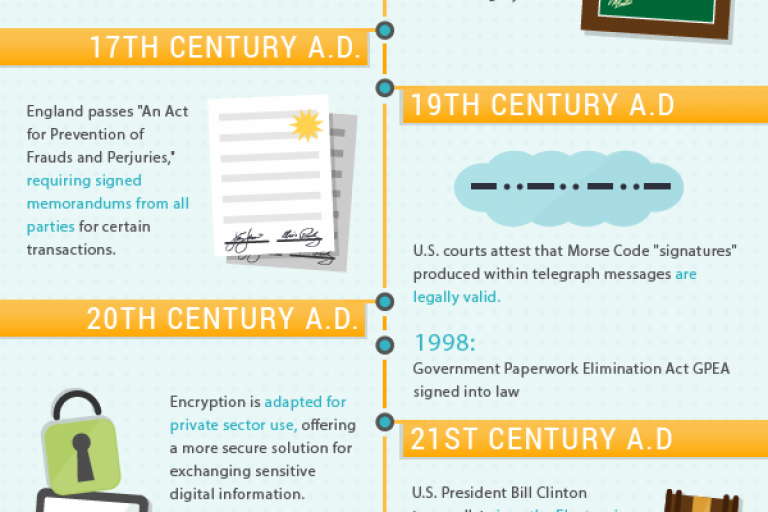 The importance of securing and protecting contracts, agreements and assets through personal authorization has been evident throughout history. While this emphasis has been present for millennia, the way people have left their mark has changed substantially over time. Contemporary electronic signature software may seem incredibly advanced compared to the clay tablets that were used in ancient Sumeria, but history makes one thing clear - new technologies or intellectual advances have often driven better ways to handle signatures.

From Sumeria to Rome - The birth of signing

The earliest examples of signatures come from ancient Sumeria, where cuneiform symbols were etched onto clay tablets that were then hardened and sealed to formally recognize the completion of a business deal. Rolling the cuneiform symbols into the clay was used to record and account for key transactions.

Egypt and Rome, two civilizations that are often marveled at today, both established key benchmarks in the move to contemporary signatures. Egypt was the civilization where signet rings first gained prominence, leading to the development of wax seals with personalized marks as signatures. Rome, on the other hand, brought the world the first true signatures, as in the 5th century Roman businessmen began writing statements at the bottom of transaction records to authenticate the document.

Expanding signature practices - To the Renaissance and beyond

Early signature practices continued for centuries and hit a major benchmark in the 13th century, when painters began trying to combat forgery by signing their paintings. This early example of authenticating a physical object is a clear example of how much signatures evolved over time, but England would take signature practices to another level in the 17th century. That was when An Act for Prevention of Frauds and Perjuries was written to create formal guidelines for how signatures would be used in specific sensitive document types.

From signing objects to prove their origin to the first legal guidelines for how signatures would be used, the period from the Middle Ages to the age of colonization brought significant change.

The 19th and 20th centuries brought about technological change so substantial that as much seems to have shifted during those two centuries as happened in the rest of history combined. In the 19th century Morse Code signatures began to be accepted as legally binding for signing contracts. This was followed by a huge step forward in the late 20th century when digital encryption technology became accessible for personal use and early electronic signature patents were filed.

You read that right, it took from the 50th century B.C.E. in Sumeria until the 17 century A.D. to get from clay tablets to formal written signature law, but it only took three more centuries to move to data encryption. So much has changed in recent years, and this is evident in the events of the past few years.

The past 14 years have brought about a sea change in signing practices. President Bill Clinton put the ESIGN Act into action, the Geico vs. Barwick case established a legal framework to consider e-signatures the same as written ones in the court of law, the IRS created e-signature policy and the FHA made e-signatures valid on select mortgage loan documents.

This is a lot of change in just a few years, so it's not surprising that many businesses are still using pen-and-ink signing for many processes. However, the rise of mobile devices, wearables and innovative e-signature technologies is accelerating change.

History repeats itself. People who can identify patterns in history can also see trends in the present and see where history is a portend of the future. The history of signing clearly points to a simple reality - technological innovation, whether it be from clay tablets to wax or pen-and-ink to Morse Code, will lead to new signature practices emerging.